BERASTAGI IS A TOWN IN NORTH SUMATRA, INDONESIA.

It is recommended that you know someone with a car in Medan, the closest biggest city in North Sumatra with an airport, because public transport to Berastagi is quite bad, often people squeeze inside a bus and some even sit on top of the roof of the bus. Anyway, there is taxi trans like Paradep Taxi or send email add: tobatransporter@hotmail.com or mobile phone +6285261492668 who will arranged your transportation as well as appointment its take; usualy the price is 450,000 IDR for private van (5 or 7 seaters), Feb 2012. You could get a taxi straight there from the airport (many touts will approach you)with normal price 350000 rp/person. Use your negotiation skill to get the price down to 250000 rp/person. You can also go to Pinang Baris bus station in Medan 10k west of city centre or to Simpang Kuala where you can get a local bus for around 25000 Rp/person (Jul 07). From Polonia airport to Pinang Baris or Simpang Kuala, you can use local minivan ‘Sudaco'(rarely)for a 2000-3000 rp. If you don’t have enough time to wait for the ‘Sudaco’, you can use ‘Becak Mesin’ which is available just outside the airport to go to Pringgan. Pringgan is the easiest place to get ‘Sudaco’ to Pinang Baris, Simpang Kuala or any other places in Medan. The common price for ‘Becak Mesin’ from airport to Pringgan is 10000 rp/trip. Bus to Berastagi takes about 2 hours. The common bus names are Sinabung Jaya. The fare is 10000 rp/person (September 2008). There are busses und both directions all around the clock. (After 9pm only the minivan-Style busses) 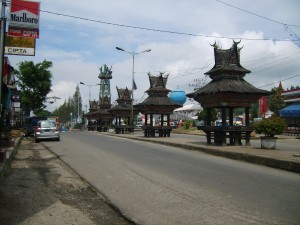 July 2012: It is possible to go from Medan to Berastagi of from Parapat (Lake Toba) to Berastagi by tourist bus . This means a minivan for 5-7 persons, prices per person. This is more expensive than by local bus but easy and convenient and it is much cheaper than a taxi.

Buses service many of the surrounding villages as is the case in the rest of Indonesia. Prices are similar to those elsewhere in Indonesia. You may get to ride on the roof of local minibuses. Many run along the main road all the time. Central market is main stop.

The tourist info is very helpfull. However, booking trips is cheaper with local agencies, for example Losmen Sibayak Guesthouse (in the centre, next to BRI bank).

A climb of Gunung Sibayak is a must. A guide is definitely required unless you are an experienced trekker as the path is very slippery, steep and confusing in some areas. Sometimes the path branches out into 2 paths and an experienced guide will definitely know which path leads to which active spot. The guides will also probably know many alternative paths to the top depending on the weather and your fitness level or time. Catch a bus to the bus terminal at the bottom of the mountain. If short on time you could get dropped off up higher as the lower part is road and not as scenic. Ask your hotel which bus (some leave from the flower market). The walk starts off by ascending sharply and really doesn’t stop climbing until you reach the 2000m summit. It is a tough walk and water and snacks are a must, but those with a basic level of fitness should be able to complete this with rests along the way. Three hours from start to summit. The road is paved the entire way up and it is impossible to get lost on the way up.please book a guide mobile 085297589379

The crater of Gunung Sibayak is filled with rocks that tourists have inevitably made into all sorts of shapes and words. From here, a good way to descend the mountain is to head off over the far side of the crater (3 o clock) down some very slippery surfaces. Beware though, there are some who have ended up getting seriously lost. In particular, avoid the trail that heads behind the antenna hill; you want to be heading down the opposite direction. Be extra cautious in foggy weather. Alternatively walk back the same way you came and about 45 minutes from the summit a road veers off to the right. This will bring you to Semangat Gunung, the hot springs village. From here, transport back to Berastagi is as easy as jumping on the first bus seen, last one around 6pm. Watching the sun set over the volcano you just climbed from the roof of the bus is magic.

You can also go to Gunung Sinabung, the easiest way is to take a minibus to Danau Kawar (a lake at the foot of the volcano) and then hike up (you should ask for directions as the beginning is not obvious). After the initial pass through the farms the path is impossible to miss (although the usual stories about lost/dead tourists exist and are listed at the tourist information office in Berestagi), so no guide should be necessary. Good views from the top and excellent walk through the jungle (the walk up to Sibayak is not quite so pleasant).

Try betelnuts from the market. You buy the leaves, a paste, tobacco and a red nut. All are mixed on the leaf, rolled and chewed. The paste is lime so it has a kick to it.

ATM, (In the main street). There are two banks with ATMs: Mandiri and BRI.

Chinese restaurant in the main street has some good eating options and hot food. Food streets are opened along the side of main street after dark. Many type of Indonesian foods are available, mostly ‘Ikan Bakar’ (Grilled Fish).

Wisma Sibayak. Western dishes. They use mainly fresh ingredients. They have also European quality natural yoghurt. Be prepared to wait as it takes time to prepare meals from fresh ingredients. Location is at the city center, near the road to Lake Kawar. Tel: 0628-91104

Try the palm wine known as tuak at a local tuak house. Don’t be surprised if someone breaks out a kecapi and starts singing. You can also snack on snake, monitor lizard, and dog meat.

Hotel CitiHoliday Stoomvaart, Jl. Letjen. Jamin Ginting, [1]. Located at the historic site of Djakarta Lloyd resort house (old dutch colonial resort), dated from 1922. It is nestled on top of a small hill with nice view and breezy wind. Next to old Bukit Kubu park. This hotel is excellent for budget traveler. Usually only open on weekends and public holidays. Will also open for group booking on weekdays. Rp 160000/night (non-peak season).  edit

Horison Berastagi, Jalan Jamin Ginting, ☎ (0628) 91999, [2]. Located in Berastagi, North Sumatra, Indonesia. It’s a 2-hour drive from Medan — simply go to the Padang Bulan Bus Terminal where there are aplenty of buses going to Berastagi. All rooms equipped with Wi-Fi Internet access, Mini-refrigerator, Sofa and table. Some of its facilities and services are Swimming pool, Restaurant, bar and Room service. Berastagi is well-known for its array of flowers and agricultural produce. Many visitors love its Lake Toba, but you should also see these remarkable places: Gunung Sinabung Volcano, Tahura National Park and Sikulikap Waterfall. Rates start at 380,005.00 IDR.  edit

Hotel Sibayak Internasional is a four-star property located on the road leading up to Gundaling Hills which is the scenic point for viewing the two volcanoes : Sibayak and Sinabung. The hotel has 112 rooms divided into several types including cottages. Facilities include heated swimming pool, restaurant, lounge, pub, karaoke and business centre with internet access. The decor is mostly wooden with ornamental colours of the local Batak tribe. It is the only starred-hotel within walking distance ( 5 minutes ) of the traditional fruits and vegetables market of Berastagi. A good discount on the already low published rate is readily given if you ask for it, barring peak holiday seasons of Muslim New Year or Christmas-New Year.

Wisma Sibayak is located on the Southern end of the main street near a giant cabbage sculpture and is quite suitably located. There are two classes of rooms and even the premium rooms are very basic. Toilets are operated by bucket and shower is using the same bucket. As the altitude of Berastagi is approximately 1300m, it can sometimes be very uncomfortable to shower with the cold water. The staff will be happy to boil a bucket of water for you for about Rp.5000. Deluxe rooms Rp.500,000. This hotel option will be suitable for all but the most fussy traveller.

Mikie Holiday Hotel and Funland, Jl. Letjen. Jamin Ginting, ☎ +626614539957. checkin: 3pm; checkout: 12pm. Located 10 minutes away from the berastagi city ,Mikie Holiday Resort offers 129 rooms,From the superior, deluxe, family,choice of 4 Theme rooms, 4 floral theme rooms, 2 suites and a Presidential suite. All rooms are equipped with Wifi excess.Guests are pampered with the mouth watering food and beverage outlets. We serve the best steamboat in berastagi and many international and local food to savor. Mikie Signature restaurants such as Frisbee a fried chicken outlet not to be missed. The Resort provides a heated pool and a games room to full fill your leisure needs. Sing your heart out at our state of the art Music box karaoke with a choice of private rooms to choose from. If you are planning an incentive outing or a meeting, Mikie provides a one stop destination to your needs. Adjoining the Resort is the Funland with over 34 international rides, paintball, Atv and many more. Watch out for our new theater that caters for 3500 person that will soon be hosting many international celebrities, and Mutiara Hotel; Hotel Sinabung, Green Garden Hotel.

Public transport to Lake Toba is possible but tricky involving 3 minivan changes. Better to charter a taxi/minivan from the guesthouse and get there in 4 hours than whole day or Taxi Trans for 500,000 IDR (Private Van); like tobatransporter@hotmail.com/+6285261492668. You could also stop at the waterfall on the way ; Bukit Lawang seems to be best reached via Medan.

Minibuses to Kutacane (for Ketambe) come through from Medan; wait up by the tourist office rather than near the market as the latter charges 10,000rp extra (presumably some kind of commission). 40,000rp (Oct 2008), 5 hours through very nice scenery.

July 2012: For transport to Lake Toba (100.000 rps/person; leaves at 13:30 or 14:00 and arrives in time for last ferry to TukTuk), Medan and Bukit Lawang, seats in one of the tourist busses (minivan 5-7 persons; PT Bagus Holiday’s Taxi) can be arranged through the local tourist agencies. This is much quicker and easier than public transport and just a little bit more expensive.
source : http://wikitravel.org